The problems with the argument in favor of Measure D

Today is the start of early voting. If you haven't yet done so, it's time to educate thyself.

Unlike those who'd prefer you not give consideration to an alternative point-of-view, I very much recommend that you read the argument presented by the proponents of Measure D. It's chock full of specious statements that deserve rebuke.

Click the images below to view the proponent's argument in favor of Measure D, as well as their rebuttal to my argument against. 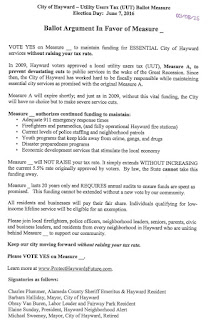 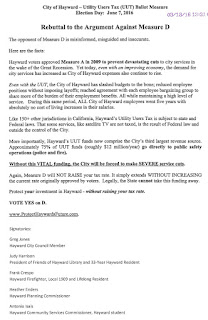 The argument in favor emphatically and dramatically states that if the UUT is not extended, the consequences will be "SEVERE" and "DEVASTATING." While such alarmist pronouncements may have seemed reasonable at the start of the recession, this incessant sky is falling rhetoric has become old and distasteful. If we are to believe that we are in the the very same state of emergency that we were in 7-years ago, then any threatened cuts should begin with the city's executive staff and the presiding Council.

As the chart below clearly shows, the city does not have a revenue problem. Property tax revenue continues to grow, the city's increased sales tax has kicked in, and we have three more years of the UUT. 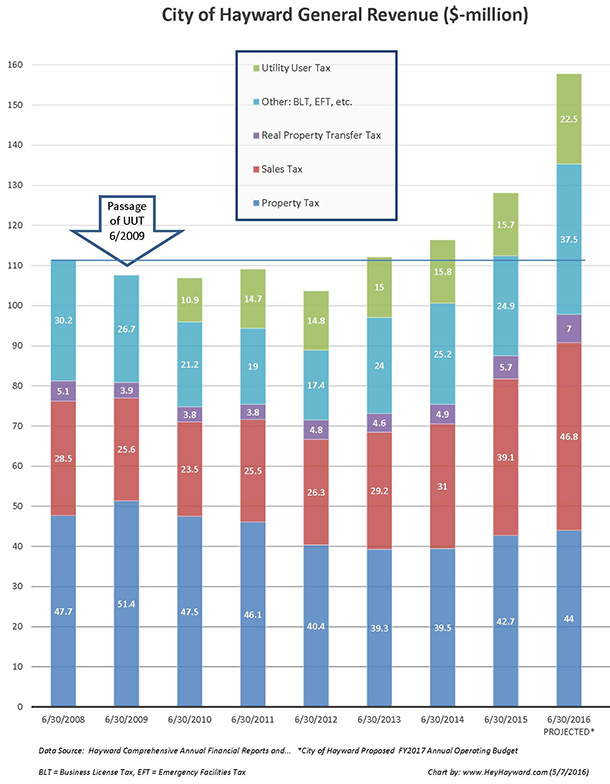 The argument in favor states that the current UUT "will expire shortly." No it won't. It will expire in the latter half of 2019--exactly 10-years after it took effect.

At a City Council meeting, this past January 26th, the Assistant City Manager explained why it's before us now. She said, "in order to ensure that we renew this critical revenue source for the city, we have two shots at coming to an election; one in June of this year and one in June of 2018."

While the statement is refreshingly candid; it confesses a plan that is entirely inappropriate. The city ought not be taking shots, preparing for possible multiple campaigns, to "ensure" our taxation. The proper approach is to provide citizens with a simple unbiased proposition at a time when it is most relevant.

Only in 2018, would it be proper to consider the question: "Do we extend this temporary, supplemental tax, yes or no?" 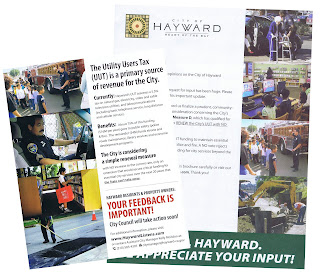 The city should not be spending tens of thousands of our tax dollars on costly marketing/polling consultants and campaign materials masquerading as "informational surveys." We shouldn't be repeatedly bothered by calls that ask "would you be more or less likely to vote for the measure if it said..."

And the electorate should definitely not be coerced with fear mongering, superfluous arguments that warn of severe and devastating consequences should the proposition be rejected.

But even if it has, so what? Is it not everyone's expectation that the city work hard to be fiscally responsible? This measure is not about rewarding a fulfillment of expectations, it's all about extending a burden on taxpayers.

Whether you believe the city has been fiscally responsible or not is immaterial; responsibleness is not a compelling reason to extend this tax.
_   _   _   _   _

The argument in favor proclaims that "by law, the State cannot take this funding away." This is just wishful thinking. The State writes the law and amends the law. For all intents and purposes, the State is the law. If the State desires funds from the city, it will have it one way or the other.

If you believe the revenue from this particular tax is safely tucked away inside a mattress, then what difference does it make if an equivalent amount is just taken from those sources that you believe are vulnerable?

Moreover, none of the city's funds are protected from legal judgments. This is the more serious threat looking forward.

Regardless, at the end of the day, the notion that this tax is more protected than other sources is irrelevant. Attempting to guard against potential threats that may not materialize is not a justification to further burden tax payers now.
_   _   _   _   _

The argument in favor states that the measure "lasts 20-years only." It might just as well be 50-years "only," as it's every bit as arbitrary.

The existing 10-year timeline coincided with city staff's prediction for the real estate recovery. The timeline for this proposed extension is not based on any justified financial factor, but only on what the City Council believes the majority of the electorate is willing to put up with.

This subject was the dominant topic of discussion among City Council members over multiple Council meetings. During the January 26th meeting, Councilman Mendell stated that he strongly favored a timeline of 20-years, "because I don't want to have to do this every 10-years."

At the February 23rd meeting, Councilman Jones said that he preferred that the tax have no end, but that a 20-year horizon was acceptable since: "I may not be around in 20-years anyway."

This protracted and arbitrary timeline, selected only for political expediency and to merely allude to impermanence, is no reason to support this measure.
_   _   _   _   _

The argument in favor states that the measure "REQUIRES annual audits to ensure funds are spent as promised." While it's true that the existing ordinance does require annual audits, it's not really for the purpose of ensuring funds are spent as promised. This is because funds derived from this tax cannot be legally obligated for any special purpose.

The UUT is a general tax. All its revenue is commingled with the revenue from all other general sources which ultimately funds the city's general operating budget.

To promise that UUT funds will be used in a particularly special way would mean that it is actually a special tax. To pass a special tax requires a two-thirds majority vote. The UUT previously passed with only a 54-percent majority.

What the UUT audit is primarily for is to ensure that the city exacts its pound of flesh. The focus of the audit is not the city's accounting records, but rather that of the utility companies.

In early April, I made an official public records request to see all of the audit reports produced thus far. Over a month has past and the City still hasn't allowed me to lay eyes on a single one. The city's only response is that the documents are currently being reviewed.

Were they not reviewed when they were originally received? Are they presently being edited too? This prolonged stalling is peculiar, opaque, and a violation of the California Public Records Act. What is the city trying to hide?

If government transparency and promises of spending accountability are important to you, then clearly the supposed existence of these audits lends zero credibility to any argument in support of this tax.

UPDATE (5/27/2016): Today, I finally received word from the City that the requested audit reports are "confidential and exempt from disclosure." This irrefutably confirms that the proponents' assurance of accountability is merely a charade.
_   _   _   _   _

The argument in favor proclaims that "all residents and businesses will pay their fair share." I hope my argument against the measure clearly explains how this is not true.

If not, here's another example to ponder: Why should a business that is heavily utility dependent, such a laundromat, have to pay an extraordinarily disproportionate amount toward city services by way of this tax than say a night-club/bar, which might have a significantly greater demand for costly police and paramedic services?

Hundreds of new residential units are being constructed and sold, such as those in the new cannery communities off of Winton Avenue. Aside from the property tax revenue these properties generate year after year (traditionally the city's largest source of revenue), every time one of these properties is sold additional revenue is generated through the real property transfer tax.

Furthermore, property owners in many newer Hayward communities are making even greater contributions to city coffers through special assessments for policing, maintenance, and lighting and landscaping.
_   _   _   _   _


The rebuttal to the argument against the measure states: "ALL City of Hayward employees went five years with absolutely no cost of living increases in their salaries." Actually, with an unsettled labor dispute lingering between the City and its Service Employees International Union (SEIU) employees, this remains to be seen. Cost of living increases might still be awarded retroactively.

Regardless, what is the purpose of this statement? To garner sympathy votes? Are the proponents of this measure so presumptuous as to imply that Hayward tax payers were doing better than city employees during these recessionary times? Many Hayward tax payers lost their jobs entirely, never mind having received cost of living increases.

Besides, it doesn't seem that city employees did as poorly as implied. An evaluation of compensation data found on TransparentCalifornia.com reveals that many employees were receiving rather generous compensation amounts in 2011 (the first year of available data) and even more so in 2014 (the latest year of available data at the time of this posting).

Have a look at firefighters. The table below shows the top earners in 2011. It compares their total compensation then with that of 2014.

If you think increases in compensation were only limited to firefighters during these years, you'd be wrong. While the magnitude of increases were typically less significant, many also received greater amounts because of automatic step increases, overtime, promotions, etcetera.
_   _   _   _   _

Think about it like this: let's say over the next four years you expect to reduce your full-time employment and associated income because you need additional time to pursue schooling, take care of a family member, or fight a wicked illness. To help you along, a relative or friend agrees to grant you a supplemental allowance--your second largest source of income.

After 4-years you return to full time work and your traditional income level is restored. At that point, do you tell your generous benefactor that the supplemental allowance must continue for at least another 8-years because you've grown accustomed to it, and because it's now your second largest source of revenue?

Would you then further have the audacity to threaten your benefactor with severe and devastating consequences if it's not continued?

No. To have this kind of gall, you'd have to be a politician.

At the January 26th City Council meeting, Councilman Zermeño admitted that the way he's "selling" Measure D on the campaign trail is by stressing this third largest revenue angle.


The rebuttal to the argument against the measure states: "Approximately 75% of UUT funds (roughly $12 million/year) go directly to public safety operations (police and fire)." As previously explained, the revenue from a general tax cannot be directly allocated for a special purpose. To state that there is this direct allocation is to declare the UUT a special tax.

But since the measure did not previously pass by a super majority (the requirement of a special tax), the proponents are thereby indicating that the UUT, with its apparent direct allocations, is actually illegitimate. This puts the entirety of all UUT funds in jeopardy of a lawsuit that seeks to recover ill-gotten gains (thereby rendering all of the persistent allusions to the State boogeyman irrelevant).

The city has already had to contend with one big ugly lawsuit due to its handling of this tax (Sipple v. City of Hayward). We don't now need a catastrophic one because of all this irresponsible fear-mongering.
Posted by Larry Johmann at 10:00 AM