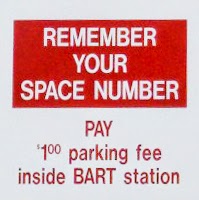 BART announced that it will soon charge for parking at the last four stations where it currently does not charge; this includes the Hayward Station. The announcement states that the daily fee will be $1, payable by cash, fare ticket, or Clipper Card. The exact date that the fee will apply at the Hayward Station has apparently not been finalized. But a City of Hayward notice states that the date will be on or around November 8, 2014. [Update: Fee will take effect on December 8, 2014]

To discuss the potential impact to the surrounding neighborhood and to hear community concerns, the City has scheduled a neighborhood meeting for October 16, 2014 at 7pm in Room 2A of City Hall. The City Council is also scheduled to have a work session on the matter on October 21, 2014.

BART plans on issuing a bulletin at least 2-weeks in advance of when the fees will take effect.
Posted by Larry Johmann at 1:00 PM No comments: