Oil by rail - not through Hayward if you please

At its meeting this past Tuesday, the City Council voted unanimously to oppose the transport of hazardous crude oil by rail.  This was in response to a Phillips 66 proposal to process Bakken crude at its Santa Maria Refinery in San Luis Obispo.

Bakken crude comes from the massive Bakken shale formation which underlies parts of North Dakota, Montana, and Canada. This formation has proven to be an incredibly abundant source of oil. So prolific, in fact, that production greatly exceeds existing pipeline capacity for transporting it to refineries. Consequently, suppliers have turned to railways as a means of picking up the slack.

One railway that could be used to deliver Bakken oil to the San Luis Obispo refinery is the Union Pacific line that traverses right through the heart of Hayward. The concern is that transporting oil this way, particularly Bakken crude, can be incredibly dangerous. Reasons for this include the sheer volume of oil that is typically moved in each shipment, the hurried pace by which shipments are apparently being made throughout the country, and the questionable containment integrity of existing tank cars. Moreover, Bakken oil has been found to be considerably more flammable and explosive than other types of crude.

It was Bakken oil that caught fire and exploded during a train derailment at Lac-Mégantic, Quebec in July 2013. That disaster spilled 1.5-million-gallons of oil, destroyed half of the city’s downtown, and killed 47 people. The ongoing recovery cost is expected to climb as high as $2-billion.

While the Quebec catastrophe is undoubtedly the most infamous incident so far, it is by no means the only one. Numerous railway tanker accidents have occurred across North America within the past 9-months, including in North Dakota, Alabama, and Alberta. Could a similar one happen right here in Hayward? Absolutely. In fact, multiple derailments (not including oil tankers) already have.

In 1980, a freight train derailed while crossing the Industrial Parkway overpass. Seven freight cars derailed, the locomotive was destroyed, and two train crewmembers lost their lives. Damage was estimated to be over $1.3M.


In 2002, an Amtrak Coast Starlight derailed near Baumberg Avenue and Industrial Boulevard. A locomotive and five passenger cars left the tracks.

What might the consequences be of a Hayward train derailment that involves oil tank rail cars carrying Bakken oil? In a staff report to Council, Fire Chief Garrett Contreras detailed a scenario where only one tank rail car (of what could be as many as one hundred) explodes. The result is not pretty. The hypothetical explosion, centered at the Hayward Amtrak Station (as shown in the figure below), would potentially be lethal over a radius of a third of a mile. This deadly blast zone includes the Burbank Elementary School, numerous parks, and scores of residential structures. Outside the immediate blast zone, burns and other painful effects might be felt as far away as three quarters of a mile.

Given Hayward's history of train derailments, the possible tragic consequences of an accident involving Bakken crude, and the tremendous political power of the oil and railroad industries, the Council is absolutely correct in taking a strong, early stand against this potential threat. Kudos to the Council and City Staff for monitoring the situation and getting out in front of it. The Council resolution approved on Tuesday night authorizes and directs staff to advocate the issue at both the local and national levels.

Congratulations Hayward! Now 9.5 and shooting for 10!

We're floating to the top!
Posted by Larry Johmann at 12:00 AM 2 comments:

Measure C - Vote No Before We're All Cooked! 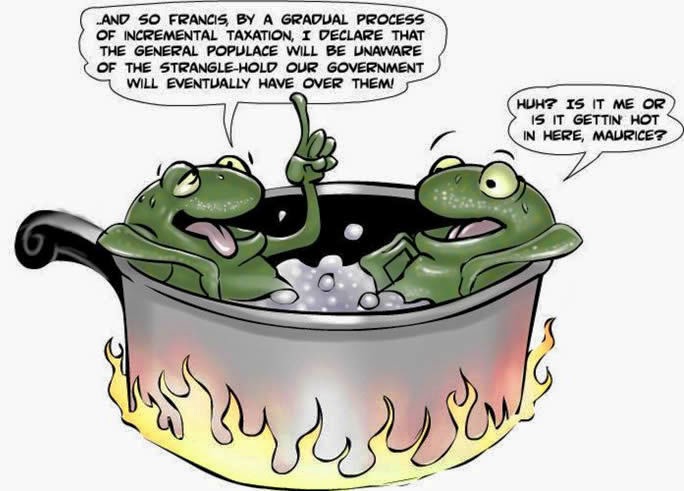 Earlier this past week I was urged to visit City Hall to examine the campaign disclosure statements that were filed by the political action committee supporting Measure C.  I didn't expect them to be all that interesting, but I made the effort anyway. As it turns out, they are rather intriguing.

Mr. Quirk contributed a whopping $7,500. Apparently public service in the State Assembly makes one wealthy and philanthropic. Or perhaps the money is otherwise a quid pro quo payback of the funds previously provided to the Assemblyman's campaign by local unions (as documented in other campaign disclosure statements).

Direct contributions by labor unions to Measure C are less than I had otherwise expected. So far the total contribution is $9,200 with Hayward Firefighters Local 1909 and Sprinkler Fitters Local 483 providing the bulk of the funding at $5,000 and $3,000, respectively.

Now here's where things get really interesting. The next largest contribution is by the architectural firm Noll & Tam. This is the firm that has been working with the City on the proposed new library since 2007. It currently has an active $3-million contract with the City to complete the library's final design. The firm initially contributed $5,000 to the campaign. But within a week of my posting "Hayward's Proposed New Library - A Costly Mistake," the firm tripled its contribution, bringing its total to $15,000. Now I'm not an authority on campaign financing, so I'm guessing this is legal. But it sure does smack of impropriety to me. This is because the contract includes a contingency pay item that's authorized at the discretion of city staff for issues not previously identified. Seeing how eager our city staff is to have Measure C pass (as evident by the City Manager's generous contribution as well as contributions made by a couple of other executive employees), one has to wonder if the firm will be recouping its contribution through exaggerated contingency claims, contract amendments, or deliverables that would not otherwise meet expectations. An independent audit would be prudent.

Finally, the largest contributor, providing $20,000 so far, is the Friends of the Hayward Public Library. This is particularly surprising; because as a non-profit organization, it is discouraged from political lobbying. In fact, the IRS imposes severe penalties, including revocation of non-profit status, on an organization that spends more than 20-percent of its expenditures on campaigning. This means that the friends group must spend $80,000 (and advisably more) on other endeavors this year. Spending a minimum of $100,000 in one year is a tremendous amount for the group considering that it only takes in about $25,000 annually.

At this past week’s City Council meeting, Library Commissioner Kelly Greenne laid into the Council for allowing a long sought library funding measure to evolve into a costly, unrestricted general fund, sales tax referendum. She fears that if approved in this form, the money can be spent any which way, potentially resulting in an undesirable project or possibly none at all. She also called for a public accounting of the $10M in library funding promised by Calpine.

In case you missed it, earlier this month the San Francisco Chronicle published an article highlighting the City's proposed library project. The article reveals just how delusional city leaders are in their belief that a new library will be Hayward's salvation. They claim it will have "a huge impact" on economic development by attracting over one million visitors to the downtown each year. They seem to be under the illusion that they're planning the next Disneyland.  The photos in the article are equally revealing. Advocates for a new library trumpet the need for space, yet photos 1 and 4 show that the existing shelving space is significantly underutilized. And why would Hayward citizens want to invest $90-million in a new library when the City is unable or unwilling to maintain it's existing from such things as a window leak as shown in photo 5? Voters ought to take note that it's this kind of deterioration from neglected maintenance that's used as justification for promoting replacement of many of the older City facilities.

On a more positive note, at the last City Council meeting the Library Director informed the Council of the department’s new goal for FY 2015: expand the library's reach by partnering with local schools. Yep, it looks like we're starting to talk some good sense. Perhaps my arguments aren't falling on deaf ears after all. Whatever way it has come about, let’s hope the endeavor proves fruitful.

Posted by Larry Johmann at 10:00 PM No comments: